Longevity is not a word you hear very much these days. We upscale and upgrade our devices on a daily basis so having a 3 year old phone for a lot of people is ancient. To contemplate a life before social media? wow thats really old school.  Even more so for music where radio playlists are full of LIL this and that, teen sensations and models who now are DJ’s since DJ’g is the new rockstar lifestyle. However going against that stream are some heavyweights. Dr Dre is the worlds biggest hiphop producer , Andy C in drum n bass, David Rodigan in reggae, Carl Cox in Techno & U2 still fill stadiums. None of those are spring chickens but there is still something in being a master. A veteran, having experience and creating and continuing to be creative because of the love of the artform and not b because of trends or social clicks .

This pond may be smaller, less shiny and twinkly, not quiet so sexy as sweet 16 but don’t confuse age with inability. It is once said a master is someone who spends at least 10 thousand hours on their craft.

So like a kung fu master,  with stealth and skills of a ninja assassin, DJ Vadim returns with album no 15! Yes, that’s 15 full albums not including remix albums, ep’s, singles, mixtapes or special editions… Insane even to contemplate the idea of a modern day artist with so much work who is still prevalent in a time where artists come and go in 2 tweets. Ya hot today and a nobody tomorrow. Flash a little flesh and you get 5 million followers. Well Vadim is not part of that hype machine. No cake throwing  but by the sounds of this album going harder than most people in their starting blocks of their career. He  has somehow carved very much his own path jumping between labels and moulding genres together. this is a sole affair. A vision by a Independista .  the rise of a one man army powerhouse. and what a journey.  it has been from the early days of smoked out beats on Ninja Tune in the 90’s to fully fledged digital dancehall rap of 2018 The Dubcatcher 3 is born.


“You can't stop the future. You can't rewind the past
The only way to learn the secret...is to press play.” - Jay Asher 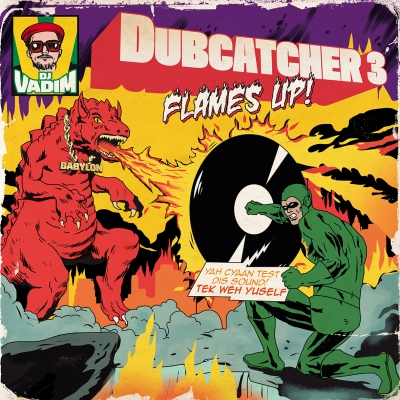